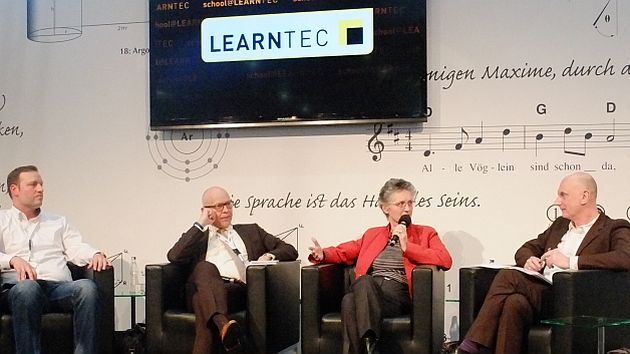 "You cannot donate education. You have to acquire it yourself," Maria Schumm-Tschauder, the project manager of the media portal at Siemens Stiftung, noted during a discussion titled "Can Foundations Donate Education" that was held at LEARNTEC 2016 in Karlsruhe. Together with Dr. Ekkehard Winter, the Managing Director of the Deutsche Telekom Foundation, and Micha Pallesche, the acting principal of Ernst Reuter Comprehensive School in Karlsruhe, she talked about the future of primary schools in Germany on January 26, 2016, at the professional forum school@LEARNTEC. The discussion touched on such issues as collaboration between foundations and schools as well as the use of open educational resources (OER).

All members of the discussion group agreed that foundations in particular could help create more equal opportunity in the educational system by initiating and supporting educational projects. One example of this approach is the media portal of Siemens Stiftung. It provides teachers of STEM subjects with about 5,500 teaching and learning materials related to science and technology, including more than 600 that are OER.

Micha Pallesche, a veteran in education as a result of his role as acting principal and teacher, underscored the useful role that open educational resources can play. At his school, his colleagues and he are already working with OER, despite uncertainties regarding the use of OER. He noted that OER have one major benefit: They are available to anyone, can be adapted to the needs of each student and can be shared.

Turning to the issue of small budgets for IT equipment at schools, Schumm-Tschauder noted that money could not be everything: "We cannot wait until everyone has acquired the technologies. We need creative teaching concepts and must spread them everywhere – in all schools and to all teachers." Teachers also have to rely on teaching materials available under open license, she said. The increasing heterogeneity of students and the changes being caused by digitalization are forcing teachers to personalize instruction materials before their use, Schumm-Tschauder said. Foundations can serve as role models and offer digital OER themselves, she noted at the end of her appeal. "The next step will be to encourage teachers to incorporate these media sensibly into their teaching concept on a broad basis," Schumm-Tschauder said. "Then, instruction and, as a result, the school will also change." The members of the discussion agreed on this point:  The challenges of the future can be better managed through a strong alliance between foundations and schools.

The 24th LEARNTEC, Europe’s largest trade fair for education and IT, was held this year under the motto "The future of learning: a digital learning culture."