The vision behind the OneDollarGlasses association is a world where every person can afford eyeglasses. Since 2012, the organization has been establishing permanent structures in developing countries that supply affordable, locally-made eyeglasses to people with vision problems. Siemens Stiftung supports the organization’s strategic expansion in Burkina Faso.

Help for 150 million people: The idea behind OneDollarGlasses

Eight hundred dollars per year – that is the estimated economic value of a pair of glasses, according to the World Health Organization (WHO). Glasses make everyday tasks easier, unlock educational opportunities, and expand professional possibilities. But for around 150 million visually-impaired people worldwide, owning a pair of glasses is not a possibility – a fact that Martin Aufmuth from Erlangen, Germany, was not willing to accept. He invented a simple model that is even affordable for people living on less than one US dollar per day. Now, with OneDollarGlasses, he’s taking this idea around the world.

Affordable glasses for everyone – locally produced and financially sustainable

Creating a social enterprise is an essential part of pursuing this goal: OneDollarGlasses can be manufactured by locals with a specially-designed bending machine and sold to others in the community. The cost of materials for one pair of glasses is around a dollar, and they are sold for what amounts to two or three day’s pay. This approach has allowed the organization to help 100,000 visually-impaired people obtain glasses in seven countries on four continents, and trained up more than 100 people on manufacturing and sales. Donations are helping the organization expand to other countries. Sales of the glasses cover salaries and expenses for infrastructure, transport, and marketing in each country, in addition to materials for new glasses. The organization’s concept provides basic ophthalmic services on a sustainable, financially-independent basis for people in developing countries. 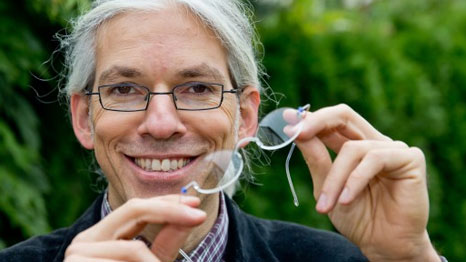 »Simply doing good is not enough. We want to reach as many people as possible while also establishing long-term, self-sustaining structures.«

Working together in Burkina Faso

Siemens Stiftung first became aware of OneDollarGlasses as part of our empowering people. Award, which recognizes technological solutions best-suited for improving basic services in developing regions on a sustainable basis. Martin Aufmuth won first prize in 2013 for his idea. In addition to 50,000 euros in prize money, OneDollarGlasses receives consulting from our empowering people. Network. To make custom-made, affordable glasses available to even more people, Siemens Stiftung has supported the organization’s expansion activities in Burkina Faso since October 2015.

Our work with OneDollarGlasses focuses on developing collaborative sales strategies that also include rural regions. This is crucial: a large portion of the population in Burkina Faso and other countries continues to live in rural areas with limited access to healthcare.

OneDollarGlasses bridges this gap in healthcare with a business model that sells glasses for about eight euros – much lower than the prices of 50 to 120 euros at a traditional optometrist. This price covers the cost of materials, production, and sales, making it a sustainable concept. The glasses are produced centrally at a workshop in Ouagadougou before they are delivered to nine decentralized shops. The glasses are adjusted by employees at the shops, at mobile sales known as ‘Outreaches,’ or in schools. 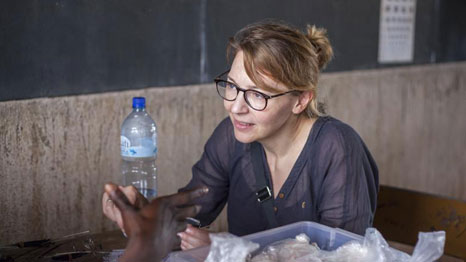 »In Burkina Faso, an above-average number of people are struggling with eye disorders and defective vision.«

Since beginning its work in Burkina Faso in 2013, OneDollarGlasses has continuously expanded its local organizational structure. To date, more than 15,000 glasses have been sold. In 2017, sales from the glasses doubled, which covered local operating costs.

The team has grown and now includes 49 employees. So far, 20 employees have taken part in a three-week optics vocational training session, based on the organization’s own “Best Spherical Correction” educational concept. Nine storefronts in Ouagadougou, Kaya, Tenkodogo, Bobo-Dioulasso, Koupéla and Fada sell glasses at a profit to the local population. An additional six shops will open in 2018. The initial ‘Outreach’ in Banfora saw the sale of 300 glasses in a single day. The break-even point is within reach for 2020/2021.

Customers are satisfied with the product. This is reflected in the results of an initial customer survey (excerpts):

Are you interested in the experience of setting up local structures for a social enterprise, or would like to support OneDollarGlasses in other regions? Get in touch!

Locally-adapted innovations with societal impact
Technology for developing regions
Stay up to date!
×