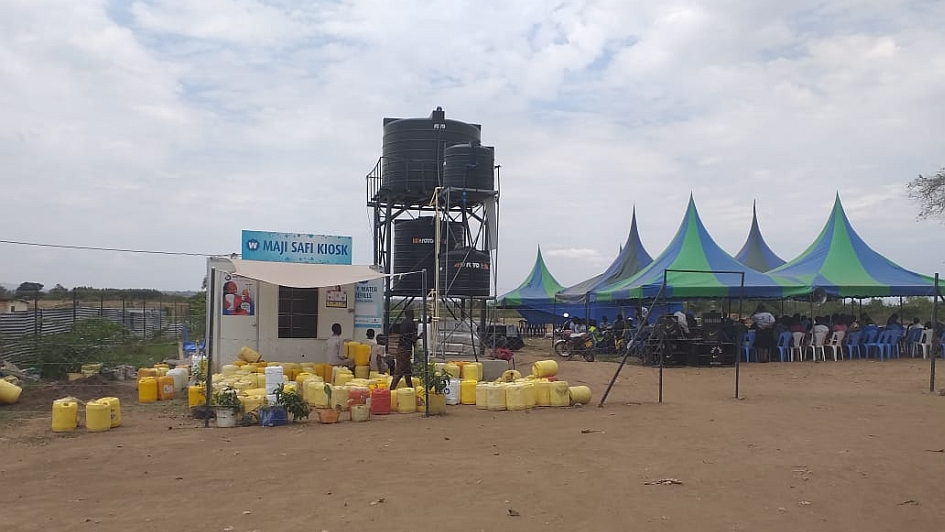 Around the world, three out of ten people do not have access to clean drinking water. Half of these people are in Africa south of the Sahara. The Migori region in western Kenya is one of the regions that lack clean drinking water. But for the last six months, a Siemens Stiftung water kiosk has been operating in the community of Wath Onger. The kiosk is one of 20 Safe Water Enterprises that provide remote communities in East Africa with affordable filtered drinking water.

Wath Onger’s kiosk was initiated by the community group LAVISO (Lake Victoria AIDS Support Organization). Technology, installation, local demand, and partners were all factors in determining the location’s suitability as a water kiosk site prior to launch in February 2019. The kiosk is operated locally with support from Siemens Stiftung.

It didn’t take long for the kiosk to have a positive impact on community health. The Migori region faces regular outbreaks of cholera and typhoid fever, but there have been no new cases of cholera in Wath Onger since the installation of the water kiosk. “The latest statistics also show reductions in typhoid fever and other waterborne diseases,” said Christine Meinhardt, project coordinator of Safe Water Enterprises. The kiosk also provides a source of income for women like Rosemary Achieng, who earns a living for herself and her four children by working as a traveling water salesperson.

Residents have taken note of the benefits. A second SkyHydrant filter was installed at the kiosk after just a short time due to high demand. Initially, around 1,000 liters of water were filtered per day. Now, it is around 20,000 liters per day. In the first half of the year alone, one million liters of clean drinking water were sold. The Safe Water Enterprise team is celebrating this success with a Free Water Day along with the local water committee, employees, health workers, and the community.