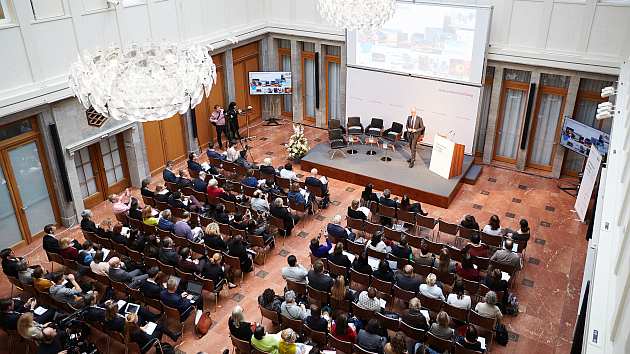 • Enabling quality: Striving for high standards as the basis for good STEM education

Global challenges such as migration and climate change call for interdisciplinary solutions. At the “International Dialogue on STEM” (IDoS) in Berlin, over 100 experts from educational practice, academia science, politics and civil society from five continents came together to discuss future-oriented education for children. The experts urge that the science and technology spectrum of early STEM education should be expanded to include aspects of values, sustainability and language education as well as artistic approaches to learning.

“STEM today is thinking across the disciplinary boundaries”, said Andreas Schleicher, PISA researcher and OECD Education Director, at the conference, which was hosted by the “Haus der kleinen Forscher” Foundation  (Little Scientists’ House) and the Siemens Stiftung during Berlin Science Week. Schleicher pointed out that creative thinking is essential at a time when education is subject to high inflation as a result of digital and technological advances. “The ability to independently acquire new knowledge and to think outside the box is the key skill in today’s world, and that must be learned.” He also highlighted the significant role of early creative engagement with nature and technology in this regard.

The consensus at the conference was that the notion of sustainable development should be an integral part of early education. Verena Metze-Mangold, President of the German Commission for UNESCO, under whose auspices the conference was held, noted: “The things we’ve learned from existing education programs on sustainable development need to be systematically incorporated into the education system – not just in Germany, but in every country.” Metze-Mangold stressed the importance of strengthening teachers and early childhood educators. Noting that the UNESCO Global Education Monitoring Report 2017 had revealed that only seven percent of teacher education programs worldwide covered Education for Sustainable Development, she said: “This has got to change!”

Digitization as an opportunity

Digital developments are increasingly shaping the world in which we live. They should therefore play a central role in the learning process. Children and young people have to be enabled to think critically about new technology. Digital innovations should be used as a tool to improve live. However digital education hardly plays a role in today’s schools.

“There is no longer an excuse for this ignorance,” said Auma Obama. The founder and managing director of the German-Kenyan “Sauti Kuu Foundation” sees digitization, first and foremost, as an opportunity: “The children and young people I work with live very isolated in the countryside. They have no computers, no access to the internet. They sometimes do not even have electricity at their homes. We want to introduce them to new information technology. They should have access to information that can positively change their lives.”

Another important topic at the conference in Berlin was how early engagement with science and technology for as many children in the world as possible can be realized at a high level. Michael Fritz,  Executive Director of the “Haus der kleinen Forscher” Foundation, noted: “The discussions with practitioners, academics, and decision-makers from all over the world had shown that – in any country – early science education only shows a sustained impact for children when it is of a certain quality.”

Nathalie von Siemens, Managing Director and Spokesperson of the Siemens Stiftung added: “Issues such as digitization, the technological paradigm shift, or the transformation of work are global phenomena.” She noted that, as a global community, we must respond to these challenges and improve the quality of education in the STEM subjects. “Unfortunately, there are hardly any international networks for early childhood education, but the International Dialogue on STEM was a first step in this direction.”

IDoS 2017 was the first in a series of “International Dialogue on STEM” conferences. In future, professionals from academia and practice from all over the world will meet in Berlin every two years to discuss early STEM education.

The press release, conference documentation, and additional information on the speakers and organisers can be found at hdkf.de/conferenceprogramme.

The conference took place under the auspices of the German Commission for UNESCO. It was also supported by the Federal Foreign Office and the Robert Bosch Stiftung.

Video impressions of the conference