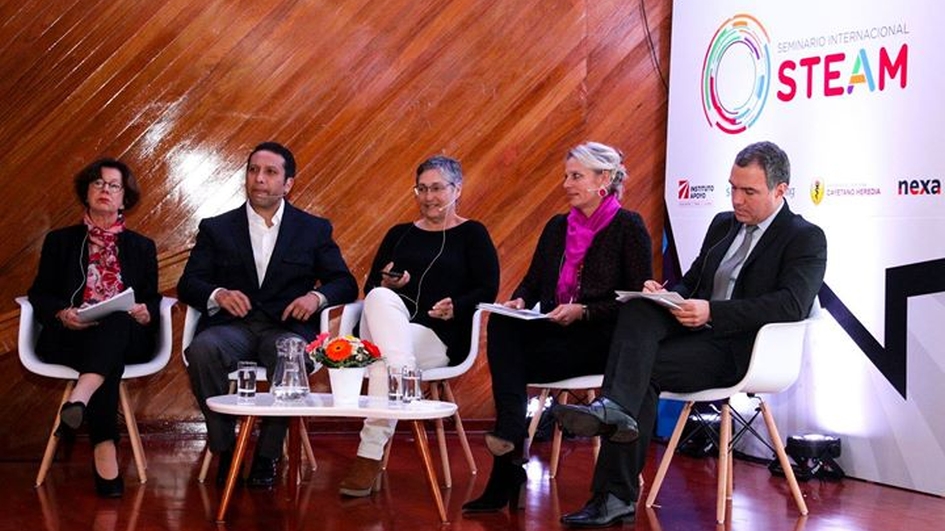 At Seminario Internacional STEAM, education experts presented concepts and initiatives designed to prepare children for the demands of the 21st century.
© Instituto Apoyo

The promotion of STEAM education, that is, science and technology training enhanced by creativity, art and culture, is one of the major education innovations in Latin America. The Pacific Alliance Meeting of the Experimento partner organizations and the Seminario Internacional STEAM were recently held in succession in the capital of Peru. Representatives from politics, science and society outlined their visions, concepts and initiatives, presented content, discussed objectives and sketched approaches to collaboration.

STEAM education with a regional touch

How can we set up a region that extends across national borders in order to fuel the achievement of our educational objectives in a manner that is both joint and takes special regional features into consideration? Can we turn the Pacific Alliance into a STEAM territory for all partners, a territory that promotes education for sustainable development? These were the central questions addressed during the third meeting of the Pacific Alliance of the Experimento partner organizations on August 15, in Lima, Peru. Representatives from Mexico, Colombia, Peru and Chile held discussions, developed steps for joint education projects and profited from the expertise of colleagues.

The group agreed on one point in particular: A long-term partnership is the prerequisite for the development of a region encompassing many countries. In a first step, a concept should define requirements: What exactly is a STEAM territory? What should it be called? How must the multi-stakeholder structure be shaped in order to influence the educational agenda across national borders? Certain subjects will have a particular focus: STEAM education for sustainable development, STEAM and gender, STEAM in early-childhood education, STEAM and community, initial teacher training and professional development as well as dual, technical and occupational education.

Promoting STEAM at the international level

Two days earlier, on August 13, the two-day Seminario Internacional STEAM was also held in Lima. It was a conference organized by Instituto Apoyo and Siemens Stiftung. Experts from all parts of the world presented their concepts and initiatives designed to prepare children for the demands of the 21st century. The number of registrations for the conference exceeded all expectations. The maximum number of attendees of 1,400, made up largely of professors and teachers, was reached a week before the conference began. The organizers also recorded more than 3,500 people live-streaming each day. This is one more indication of educational change in Latin America and the interest in STEAM.

Daniel Alfaro, Peru’s Minister of Education, opened the conference by discussing his vision of education. His address was followed by Culture Minister Patricia Balbuena and Fabiola León, the Director of Concytec (National Council of Technology Science and Technological Innovation). Professor Dr. Kristina Reiss, Dean of the TUM School of Education, Germany, and Ulrike Wahl, the representative of Siemens Stiftung for Latin America, reported on their experiences and discussed the concept of a territory whose impact reaches across national borders. Similar reports were offered by Guillermo Legorreta of Mexico City and Nuria López of Barcelona.

Which industries can help education succeed in the 21st century? On the second day of the conference, representatives of the business world, the media and universities shared their thoughts. The efforts being undertaken by members of society were also explored during the meeting, which was well-attended by professors and teachers: The Grupo Rocío of Colombia, for instance, invests in education in order to bring about change. The foundation La Revolución of Peru plans to fight anemia with the help of education.

Innovative STEAM schools, such as the Colegio Kopernicus in Chile and the Tinkuy Marka Academy in Peru, presented promising concepts for science and technology education in Latin America: They outlined the new approaches they are taking and the ways they are breaking through conventional thinking.

This brought an end to a successful STEAM conference and confirmed the motto of the organizers once again: “We are all capable of transforming the world. Education empowers us to do so.”

The Seminario Internacional STEAM emerged from the Foro Nacional STEM. It is an alliance of institutions and associations that are committed to promoting education in the areas of science, technology, engineering and mathematics (STEM) throughout the entire educational chain. The aspects of creativity, art and culture have now been added as a complement to science and technology training. This change has resulted in a new acronym: STEAM. The institutions taking part in the Seminario Internacional STEAM represent important Latin American and international educational organizations. Its members include Instituto Apoyo, Siemens Stiftung, TUM School of Education of Germany, Universidad Ruiz de Montoya, Universidad Peruana de Ciencias Aplicadas, Pontificia Universidad Católica del Perú and Universidad Cayetano Heredia.