The international foundation Siemens Stiftung, the Mexico office of UNESCO and INNOVEC join forces to promote science and technology learning in Mexico 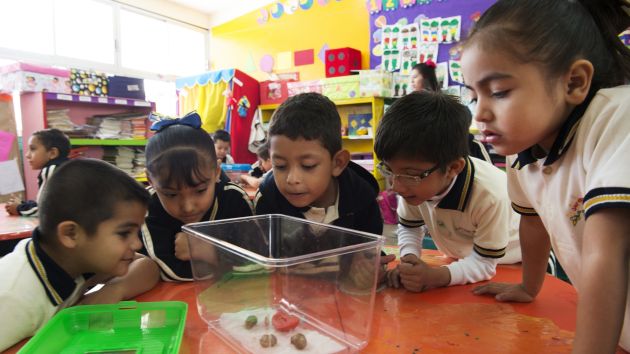 The program Experimento begins in early infancy and runs through all levels of schooling. The research-based method promotes a culture of active group learning in classrooms and helps to reaffirm the concepts learned.
© Siemens Stiftung

As part of the “Made in Germany” exhibition, the three organizations confirmed the launch of activities coordinated with other Mexican institutions in 2016 with the preschool science and technology education project. This initiative places particular emphasis on creativity in girls’ learning and motivation in these fields. The pilot project will be run in 150 state schools in 10 states in Mexico.

This was announced by Nuria Sanz, Director and Representative of UNESCO in Mexico, Ulrike Wahl, Head of project development in Latin America for the Siemens Stiftung, and Guillermo Fernández de la Garza, member of the INNOVEC board.

UNESCO is in agreement with the Siemens Stiftung that quality science and technology education will help to find solutions to economic, social and environmental issues in order to achieve worldwide sustainable development. To do so, we need the scientific potential that would be provided by a greater number of girls and women in science. “This partnership project is a strategic step towards the achievement of the UN’s Sustainable Development Goals and the Education Agenda 2030,” explained Nuria Sanz, Director and Representative of UNESCO in Mexico.

For its part, the Siemens Stiftung International Foundation, which is committed to research-based teaching and learning in the sciences, stated that this agreement is part of its activities designed to expand and reinforce the Experimento program—which was launched in Mexico in 2014 in conjunction with INNOVEC in schools in Guanajuato and Querétaro—throughout the education system. The not-for-profit civil association INNOVEC has been working for more than a decade to improve science training for children and young people attending state schools providing basic education in Mexico by promoting research-based learning. INNOVEC uses this approach to allow students from pre-school to secondary to “learn science by doing science”.

The Siemens Stiftung will allocate nearly €1 million to Mexico in the coming years to strengthen science and technology teaching in schools.

Through the Experimento program, it aims to complement the teaching skills of school teachers with a view to stimulating interest and curiosity in the sciences among children and young people using different teaching materials and experiments. The program begins in early infancy and runs through all levels of schooling. The research-based method promotes a culture of active group learning in classrooms and helps to reaffirm the concepts learned. The international foundation is present in 11 countries across three continents. In Latin America, Mexico is one of seven countries running the Experimento program.

“Experimento has already had a positive impact on children and teachers in its first phase. This is why we want to expand the program and help more Mexican children to learn by doing science. Siemens Stiftung is delighted to be able to join forces with UNESCO and to work alongside qualified institutions,” commented Ulrike Wahl, Head of project development in Latin America for Siemens Stiftung.