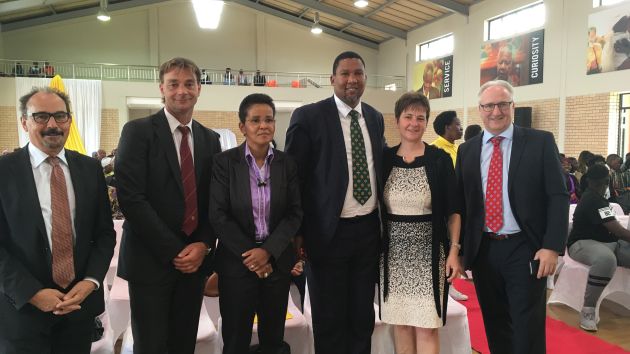 “We want to prepare the youth of today to change the world of tomorrow” – is the goal set by the Mandela School of Science & Technology, which opened its doors in January 2014 as the first high school in the underresourced region of the Eastern Cape in South Africa. The focus has always been and continues to be science, mathematics and technology. At the end of this academic year, for the first time ever the school will bid farewell to its first ever Grade 12’s and allow 73 students to spread their wings and enter the professional world equipped with solid science knowledge and skills. Many people attended the celebratory ceremony on December 07, including Nelson Mandela’s grandson, Zwelivelile Mandela and Managing Director of the Siemens Stiftung Board of Directors, Rolf Huber. Mr. Huber said: “We’re proud to be able to support the Mandela School in educating a new generation of students. Equipped with their science and technology education, they have real potential to strengthen not only the region but also the whole of South Africa and beyond.”

An exchange program between students and teaching staff from the Mandela School of Science & Technology and those from the Nelson Mandela School in Berlin also enables two students and one teacher to visit the partner school in Germany once a year. Once there, the students attend classes, meet their fellow classmates and learn more about local life, and the teachers get a good insight into teaching practices at the school in Berlin. The Deutsche Internationale Schule Johannesburg also began participating in the partnership this year.

The Mandela School plays a central role in guaranteeing the quality of the education provided in the Eastern Cape. It not only fosters close ties with the Walter Sisulu University, at which many teachers get their degrees, but also provides colleagues from the elementary schools in the surrounding areas with the opportunity to take part in advanced training. The Mandela School has had close connections to the Siemens Stiftung ever since it was founded. It uses the international educational program Experimento to embed discovery-based learning and ensure that it is an integral part of science education. The younger teachers got to grips with the practical methods as part of their degrees at the Walter Sisulu University, where Experimento is a fundamental component of teacher training. This was then followed by more detailed Experimento training both for the teachers at the Mandela School and those from the schools in the surrounding areas. The Siemens Stiftung has been supporting local trainers to run an active exchange program between teachers at all the schools and hence continuously establish and expand the international network.