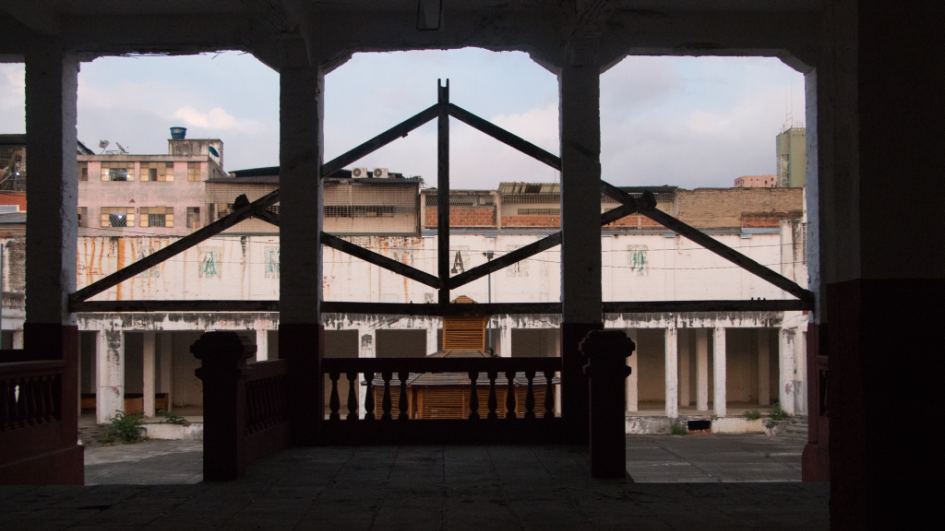 How does a city meet the challenges of living together under the pressure of change? How does a sense of belonging arise in urban space? And what role will art play in this process? As part of the CHANGING PLACES / ESPACIOS REVELADOS project, artists are activating and transforming empty buildings and public space in the Colombian city of Bucaramanga. From November 23 through December 1, new perspectives on the city and experimental field for urban life will crop up in 11 locations around the city.

Bucaramanga, a metropolitan area with a population of more than 1 million people, is located in northeastern Colombia. As a result of its proximity to the border with Venezuela, the area is also caught up in the migration movement of people fleeing the neighboring country. Bucaramanga’s rapid growth has created a social chasm that separates the north from the central part of the city. It has also given rise to questions related to its cultural legacy. Against this backdrop, the multi-part project called CHANGING PLACES / ESPACIOS REVELADOS addresses the significance of culture for a city’s community when it transforms urban venues into places of encounter and reflection.

During the first phase of the project conducted between April and September 2018, artists worked in 11 labs with a range of demographic groups in the city centre and northern part of the city. Now, in the second phase, Colombian and Latin American artists are currently developing site-specific works in the city centre. Other interventions will be realized in northern Bucaramanga before the project ends in April 2019. At the same time, a participatory archive on the imaginary of the city is being created in Casa Luis Perú de la Croix.

Cities are public places. But public places are decreasing. In his project, the Cuban artist Fidel Castro is working with five young artists who attend the local Escuela Municipal de Artes and the sound artists Luis Miguel Delgado to transform the empty building of Plaza San Mateo in the heart of Bucaramanga into a public space. The historic market and assembly plaza was abandoned nearly 40 years ago. Seven interventions designed to recapture the building for social negotiation processes are being created on the basis of research and encounters with former dealers.

A change of perspective on the lives of migrants

Public parks in the city, such as the Parque Bolívar, have become places of refuge for migrants who have nowhere else to turn. A growing number of Venezuelans have felt compelled to flee their country in the wake of the crisis there. Edinson Arenas is working on a huge textile intervention at the square with the help of some of them. He is sewing a huge rug and thus brings all the different pieces together. Over the course of conversations with women from Venezuela, Alexandra Gelis, a native of Venezuela herself, has explored prejudice, foreignness and fears that the women face in a different country. In a video installation and performance, she lays the stories one top of the other in an empty store in the city centre.

On the Galán Square, Grecia Quintero draws a line with 100 chairs. She then has members of different demographic groups from the city and countryside, people who live in different worlds in spite of the proximity to one another, sit down and communicate. Under the title “Germ of the Common Seed”, Guillermo Quintero addresses the question from a different perspective: He paints the facade of a historic apartment building with lines from Pablo Neruda’s collection of poems called “Canto General” that focus on the battle against colonialism and the hope for independence.

A look at the legacy as work on the future

One of the key questions being weighed by the artists is: How can the contradictions of a city be turned into something productive? The Mexican theater maker Aristeo Mora is using the abandoned Club de Profesionales as a stage to investigate failed urban projects. In workshops and a performative exhibition, he is exploring visions of a city that have never come true.

Other works involve an urban search for clues: Daniel Lie of Brazil encounters colonial resistance in a historic residential building. Mapa Teatro views the theater as a fossil. Jonathan Blanco explores an archaeological dig. Ángel Gélvez electrifies memories, and Bicho Arquitectura transforms a battered old bus that once supplied books to the city.

Oscar Leone explores the legacy of natural reserves in a hike along the city’s water reservoirs. In the process, he initiates a discussion about the relationship between culture and nature that is no longer characterized by exploitation and destruction and that respects the intrinsic value of nature. The video installation that has arisen from this effort shows a network of environmental, social and cultural relationships.

CHANGING PLACES / ESPACIOS REVELADOS Bucaramanga is a collaborative project of the foundation Siemens Stiftung and the Instituto Municipal de Cultura y Turismo Bucaramanga and Ecoemprender. It is being conducted with the support of Escuela Municipal de Artes Bucaramanga, Fundación Mapa Teatro – Laboratorio de Artistas and Sena. More information about the program is available on the project’s website: www.espaciosrevelados.co and on www.siemens-stiftung.org/en/projects/changing-places-espacios-revelados/events/bucaramanga-2018/

Stay up to date!