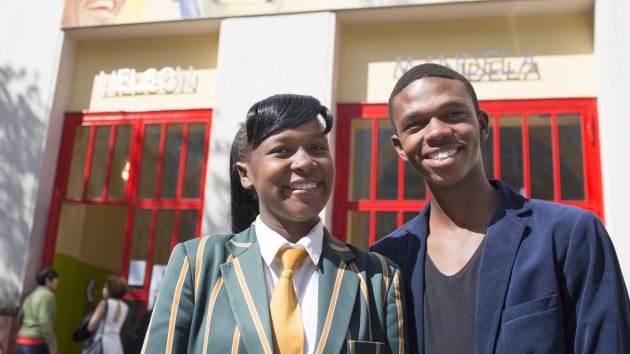 Aged 16 and 19, Ntando Tshinavha and Anda August are young enough to have been born in a free South Africa. The two secondary school students come from Nelson Mandela’s birthplace, Mvezo, in the country’s Eastern Cape province, where they attend the Mandela School of Science &Technology. Siemens Stiftung invited Ntando and Anda, along with their teacher Nozuko Mkizwana, to visit the International Nelson Mandela School in Berlin. They are the first to take part in such an exchange. Last week, they had the opportunity to participate in lessons in the German capital, meet students from all around the world, and find out more about life in Germany at home with their host families. It was a week full of new experiences for everyone involved.

The informal atmosphere in the classroom, where lessons mean not just listening, but participation and discussion too, is different to what the exchange students are used to in South Africa. “I would like to take something of this open spirit back with me to our school. I think the teamwork between students and teachers is great,” said their teacher Nozuko Mkizwana, who accompanied the students on their visit.

The school in Berlin was also able to learn from the South African guests. During assembly, Ntando and Anda delivered a presentation to several hundred students about everyday school life in Mvezo. They impressed their audience with a wealth of information and with their self-confidence and presence.

The school exchange is an initiative by Siemens Stiftung as part of its international educational program Experimento. The program works to promote high-quality “education for all” in South Africa and other countries. It offers teachers a practical and curriculum-oriented selection of topics. Specially developed advanced training seminars provide educators with relevant knowledge that they can use in lessons. Since the program began in South Africa in 2011, it has reached more than 320 teachers at 150 schools.

The Experimento program is used at the Mandela School of Science & Technology in Mvezo, too. The secondary school in his home village of Mvezo in South Africa’s Eastern Cape province was one of Mandela’s personal wishes. Siemens established this, the region’s first secondary school in partnership with the government and local community. It opened its doors in January 2014 and gives young people from the local area the opportunity to shape their own future.

Ntando, for example, dreams of becoming an agricultural engineer. Anda wants to work in accounting: “And when I’m older I definitely want to build more schools like ours.” The legacy of Mandela’s ideas is an important part of the students’ life. Ntando: “Mandela once said: It always seems impossible until it’s done – I never thought it would be possible for me to come to Germany – and here I am!”