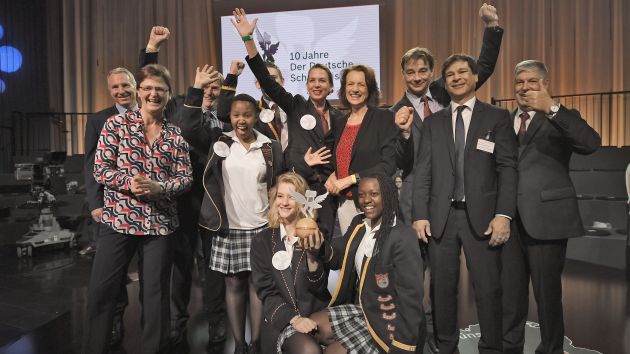 Exceptional student performance, diversity and respectful interpersonal relationships were just a few of the quality areas in which a school had to produce above-average results to win over the Robert Bosch Foundation during this year’s selection process for the German School Prize. In the 10th year of the program to select Germany’s best schools, German schools located outside the country had the opportunity to compete for a special award for the first time in 2016. And the winner is: the German International School Johannesburg. The cooperation partner of the Siemens Stiftung impressed the jury of teachers and professionals from the educational sciences sector with its creative and imaginative approach to diversity – a complex challenge for a school with more than 1,000 students from 36 countries with 32 religious denominations. During the award ceremony held in Berlin on June 8, representatives of the school accepted the award from German Foreign Minister Frank-Walter Steinmeier. The award comes with prize money of €25,000.

The German International School Johannesburg is one of the most widely recognized schools in South Africa. The well-connected school maintains relationships with a large number of schools, teacher associations and universities. Siemens Stiftung began working with this school in 2011 as a way of setting up and establishing its Experimento international educational program in South Africa. Through this cooperation, it also gained access to the Sci Bono Discovery Center, an opportunity that enabled Experimento to gain a firm position in the national continuing education program for teachers.

“The German International School Johannesburg certainly deserved to win the award,” says Rebecca Ottmann, the project manager for Experimento Africa at Siemens Stiftung. “Its primary mission is to enable politically and financially disadvantaged groups to gain access to education. With Experimento, we aim to help improve South Africa’s schools. In our workshops, teachers gain all sorts of new ideas about teaching the natural sciences. As a result, we are seeing a performance-based development among South African students: Scientific and technical interrelationships are more readily grasped when they are taught in an experiment- and activity-based manner. This is a remarkable result for South Africa in particular, a country that brings up the tail end of international rankings.”